How to find your way around Kyushu

New habits in the time of Corona Sorry, nothing to report as traveling in japan is possible but not advisable right now

“Let’s do our best together until people from all over the world visit Kyushu again! “

Location: https://goo.gl/maps/JYbBV5VSQvUPq1YV6 Unzen Details you will find here. In 1927, Unzen was ranked 1st in the mountain category for the New Eight Views of Japan, and in 1934 was designated as our country’s first national… More

Nanzoin is the general head temple and the first amulet-issuing office of Sasaguri Buddhist pilgrimate Route, details you will find here. If you want special, go there!

Miyazaki-ken (Prefecture) is located on the southeast coast of Kyushu on the Pacific Ocean. The area is subtropical and is characterized by the third mildest climate in Japan. Details you will find here.

Myazaki-Jingu is a shrine in honor of the first Japanese emperor Jimmu. The current building was renovated in 1907 and the foundations are estimated to be around 600 years old.
It is believed that the shrine as such is over 2600 years old.
According to Japanese mythology, Emperor Jimmu was an offspring of the sun goddess Amaterasu. Although the story is not accurate, it is generally accepted that Japanese emperors have ruled for more than 1,500 years and that they all descend from the same imperial family.

Heiwadai Park, or Peace Tower Park, was built in 1940 to celebrate the 2600th anniversary of the ascension of Emperor Jimmu, the mythical first emperor of Japan, on what is believed to be the original site of his capital. Inside the park stands the Peace Tower, or Heiwadainoto, a tower constructed of stones sent from all around Asia and one of Miyazaki’s most recognizable landmarks.The Peace Tower was meant to symbolize a united world. On the front of the tower is the phrase “Hakko Ichiu”, which is attributed to Emperor Jimmu and means “United under one roof”. While it is somewhat ambiguous what he meant, this was often used as a rallying cry for imperialists who believed that peace would reign once Asia was united under Japanese leadership.

The park is located in an area between the southwest of Miyazaki City and the city of Kitago. “Obisugi” (Japanese cedar) grow in the mountains of Miyazaki-ken. The trees were planted after World War II to boost the production of wood. And to replace cut down trees due to the beginning of reconstruction in Japan. Within the park there is a large area called “Yabu-tsubaki” because of the wild camellias that grow there. Tsubaki is the Japanese word for camellia. The “Tsubakiyama Forest Park” camellia park was officially opened on May 1990. Internationally, it was soon recognized as the “Number One Camelia Park” around the world. Around 48,000 different kinds of camellias grow in the park. In between you will find the cedar trees and occasionally a beautiful magnolia tree. The area covers over 40 hectares.

The “mountain” is at an altitude of approx. 400 m, although you have to remember that the start is almost 0 meters above sea level. It takes about 45 minutes by car from the center of Miyazaki City. A bus doesn’t run. A rental car is recommended. Drive carefully, it is on a narrow road. 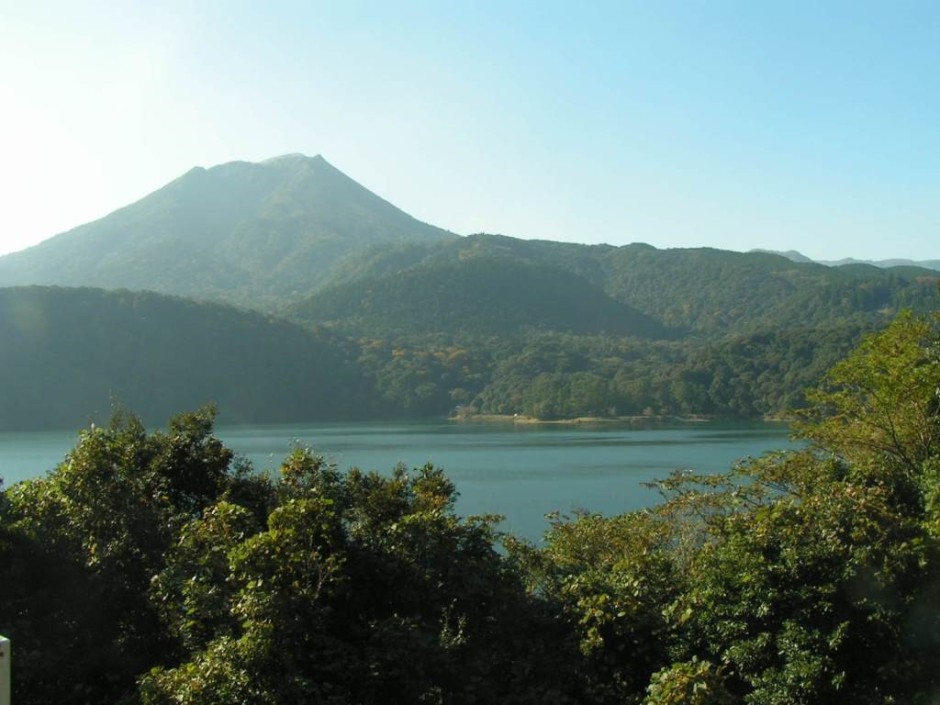 Look back at the Age of the Gods, when deities ruled the world. Looking down from heaven, they saw “an island floating in a foggy sea,” which is said to be where Kirishima (“fog island”) derives its name. Details you will find here.

Trekking in Kirishima, details you will find here. 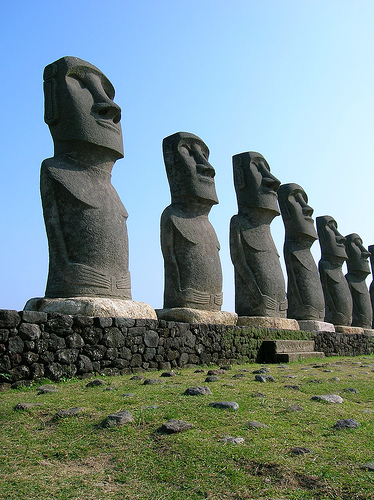 What is MOAI? See here.

MOAI’s in Miyazaki Prefecture, details you will find here.

A tour of the seven hells where fumaroles and hot water vigorously errupt from the ground. Details you will find here.

Nagasaki is the capital and the largest city of Nagasaki Prefecture on the island of Kyushu in Japan. Details you will find here.

A visit to the Peace Park is an absolute must, it is more intensive than the site in Hiroshima. Once you are there, you are amazed at the size of this monument. The right arm points upwards: The misfortune came from there. The left arm is stretched out as a gesture of peace. The eyes are closed in prayer for the dead. It’s huge. Together with the Atomic Bomb Museum, you should plan half a day to visit this park

The Saitobaru Burial Mounds emcompass over 300 burial tombs an various sizes. Details you will find here.

On the geothermally heated sandy coasts of Ibusuki and Yamakawa, you can experience unique and natural steam sand baths. Details you will find here and here.

Udo Jingu Shinto shrine is dedicated to Yamasachihiko, the father of emperor Jimmu, the mythical first emperor of Japan. The shrine is famous for its unique construction. It is built inside a cave on a coastal cliff.

A beautiful journey along the Nichinan Coast

Aoshima Island is a small, beautiful island just off the coast south of Miyazaki City. Aoshima is connected to the mainland by a bridge.

All the details you will find here.

Ideal for surfers, newly constructed. Have a look here. Reservations available on their homepage. 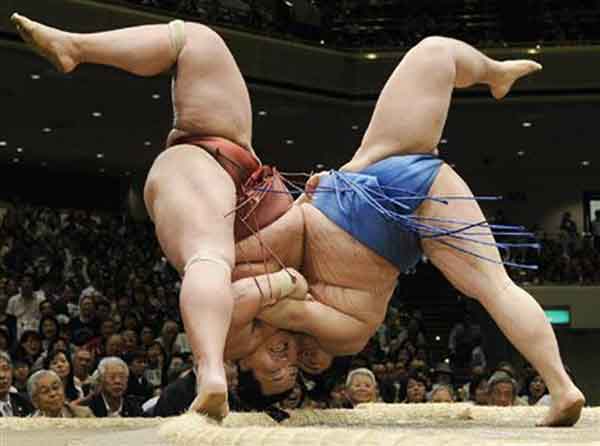 And a reliable forecast of precipitation for the coming 15 hours, you will find  HERE:

My Kyushu contains links to external websites that are not provided or maintained by My Kyushu.

Please note My Kyushu does not quarantee the accuracy and completness of any information on the external websites.

All content on My Kyushu is for informational purposes only. The use of any information provided on this site is solely at your own risk.